In Resurrection, journalist Annette McGivney celebrates the reservoir's [Lake Powell] decline as an opportunity to reclaim and restore Glen Canyon...James Kay's photographs show glowing sculpted sandstone corridors emerging from the silt, waterfalls beginning to run again, and cottonwoods reclaiming their native soil. With a foreword by Bill McKibben, guides to newly restored hikes and suggestions to further action, the book is part history and part manifesto for a new era of Western water management. --High Country News, May25, 2009

There have been literally hundreds of books written about Glen Canyon, the Glen Canyon Dam and Lake Powell near Page, AZ. Unfortunately, given the critical importance and controversial nature of the subject, most are not really worth the reader's time. This book is an exception. --The Oklahoma Observer, May 25, 2009

No matter your view on Glen Canyon and whether it should be preserved or not, this is a book that will capture your attention. It is thoughtfully written and the images of Glen Canyon and Lake Powell are spectacularly interesting. --Deseret News, March 28, 2009

Glen Canyon and a New Vision for the American West
With photographs by James Kay
Foreword by Bill McKibben
Braided River/The Mountaineers Books, 2009

Annette McGivney explores the controversy and the history of water politics in the American Southwest through the lens of the re-emergence of Glen Canyon due to an ongoing drought. More than 125 large images by photographer James Kay capture the beauty of the legendary canyons of Glen Canyon as they emerge into the light of day for the first time in nearly 40 years. Resurrection was named a "Top Pick" by the Pima County Library Association in its 2009 Southwest Books of the Year. 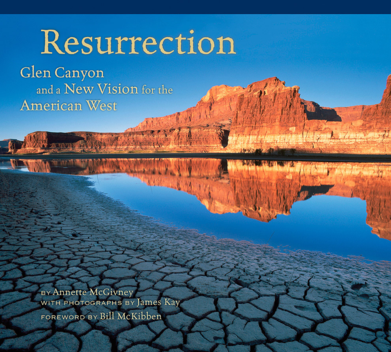 Through insightful narrative and stunning photographs, Annette McGivney and James Kay introduce us to an ecological miracle that is occurring in the American S outhwest: the reemergence of Glen Canyon. After construction of the Glen Canyon Dam, the mighty Colorado River was drowned, forever disturbing the region's fragile ecology of native plants and animals. McGivney and Kay point to the larger issue at play in the region--evidence that drought and climate change are leading to a showdown over water distribution. This is yet another example that the next major resource war will be fought over water. It's a problem that our entire planet faces--and requires our immediate attention.  -- Robert Redford, actor, director, conservationist, and trustee of the Natural Resources Defense Council

There are days when it seems to me I'm in the obituary business. After a quarter-century of writing and fighting about global warming, it sometimes gets to be too much. The loss of the Arctic's sea ice, of the permafrost tundra, of the coastlines ravaged by rising seas, of the species pushed over the brink, of the people left in the path of malarial mosquitoes. Too much. This is why this book has given me more pleasure than anything I've read in ages. It's the opposite of a eulogy; it's a birth notice, or a rebirth notice, for one of the central landscapes in the American imagination. Annette McGivney's sage, balanced, and beautiful prose and James Kay's informative and inspiring photographs provide a strong hit of that caffeine we most need right now: hope, real honest-to-God hope that someplace in the world is getting greener, not browner--better, not worse.  -- Bill McKibben, author of The End of Nature and The Bill McKibben Reader; founder of 360.org

Anyone who wept as rising waters drowned Glen Canyon will rejoice at the resurrection documented in these pages. Anyone who wonders what made this the most special of the Colorado River's canyons will find the answers here, too. And anyone who wants a sustainable future for the Southwest, with human demands balanced against the desert's limits, will be reminded that asking less from the Colorado can mean gaining a treasure --for ourselves and the future. -- Barbara Brower, author, professor, and daughter of David Brower

In these pages, Annette McGivney and James Kay document the precarious state of the Colorado River and the Glen Canyon through which the river flows. This book should be read and studied by anyone concerned about the climate crisis we now face and the fate of the natural world. The recovery of Glen Canyon provides us with hope and should inspire us to right a previous environmental wrong. It will just take foresight and courage to find solutions to restore a healthy Colorado River ecosystem.    -- Martin Litton, conservationist, writer, former river guide, and founder of Grand Canyon Dories